My saga begins in Chicago’s O’Hare airport in 2008. Mom and I were on our way to London to see her favorite opera star, Bryn Terfel (pictured below), in “Tosca” at Covent Garden. We were slated to meet a group of people from the fan club, the Terfeliads, a group of ladies who caravan around the world to see this dashing Welsh super star fill their hearts with bass baritone splendor. They are, as I like to say, the Dead Heads of the opera world. We fit right in. 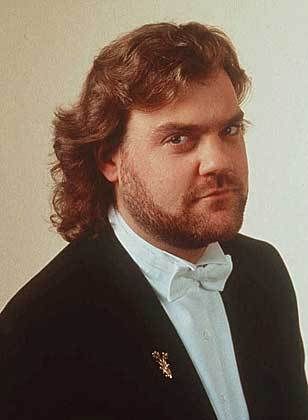 Icy weather had delayed us out of Dallas so we knew we would have a miniscule window in which to make our connecting flight to the UK. So here we come, down the wide, cavernous, echoing main promenade at O’Hare, running as fast as our non-sensible shoes with spindly, ankle-breaking heels could take us to our gate. We show up staggering and sweaty, hair flying in every direction (except for mom’s), dragging our over-packed bags behind us like body bags.

And then we see it – the plane slowly pulling away from the gate.

“Aaaah!” we both say, and look at each other with utter despair, dropping our bags with overly dramatic flair and flinging our hands in the air, saying, “We were sooooo close!” (I don’t know why I say “we.” I was the only one doing this. Mom was her usual elegant, dignified self.)

With crestfallen hearts, we start wringing our hands and worrying about what we might do next. How would we make it to see Bryn?

As we are doing this, I notice a man to our left. He, too, had missed the connecting flight and was less than enthused. He mentioned he had hoofed it all the way from his gate, a flight from LA. Only thing was he didn’t look disheveled or rattled in any way. No hairs out of place. No sweat around his collar. No, he was hip and cool in his dark leather jacket, toting a black carry-on and interestingly, a giant film reel the size of a dinner plate charger (but thicker) on a small trolley.

He looked familiar, but not immediately so. He was definitely Captain Hunk – tall with dark, distinct eyes and perfectly arched brows. He had an elfish, mischievous grin. And killer dimples. His voice slayed me. Very deep, resonant voice like an FM radio announcer. I knew he was somebody, but I didn’t know just who.

We struck up a conversation with this friendly, handsome man. He was out of ideas, too, about how we were going to get to London. We talked to him for a few minutes, sharing our mutual irritations about the plight of air travel while we all droned on, frowning and fretting with disappointment.

In a few minutes, an American Airlines gate attendant in her red and blue scarfed, official self appeared and told us we’d be on the next flight. Not to worry. It would depart about midnight and it would be taking off a few gates away.

Soon more people who had missed their connection arrived then we all waddle en masse with our bags like little ducklings down to the new gate.

Mom and I decided to get some sandwiches for our long flight so off I went to fetch our nourishment.

When I returned with full bags from Which Wich and sodas, a conversation between my mom aka The Red Headed Bombshell and this mystery man with the film reel was in full swing.

“Lisa, this is Patrick Warburton. He’s on ‘Seinfeld, SEINFELD‘ “, she said in an elevated tone. “He was Puddy, Elaine’s boyfriend,” she said. “He’s been in lots of TV shows and movies.”

I chimed in and said, of course I recognized him. 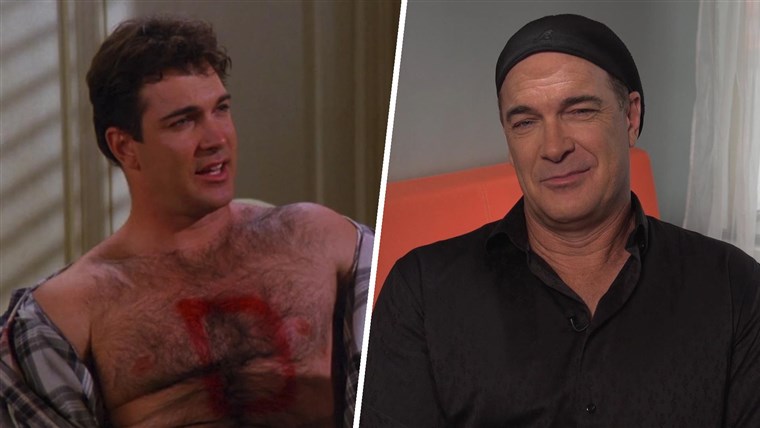 “I thought I recognized you,” I said. “I knew you were somebody. Just didn’t know WHICH body of the SOME you were.”

He smiled and gave me what sounded like a courtesy laugh. I asked about his film reel. Turns out he was taking it to the Irish Film Festival in Dublin – and he was one of the main stars, Mack. I think the film was “Made for Each Other.” Here’s the IMDB plot summary:

The best part of any marriage is consummating it. However, after 3 months of a sexless marriage, Dan finds himself in the throes of casual sex with another woman. Dan decides the only way to morally rectify this is, of course, to get his wife to cheat on him and thus he sets out to find the right man to even the score.

“My daughter, Lisa, she did a film, too,” mom said, proudly, beaming with pride.

“Yes, your mother was filling me in on your documentary,” Patrick said with a glimmer in his eye, as he popped open his Coke can.

“Yes, I did a film about a homeless guy, Bob, and the tagline is ‘The story of a spiritual savant who survives his own personal holocaust.’ ” He smiled and made some witty remark and I returned with something that was less than witty, I’m sure. Nevertheless, the volley was on.

Mom told Patrick all about Bryn, and gave him Bryn’s operatic CV, i.e. where we had gone to see him (New York, Chicago, Houston, etc.), who was in the fan club and more. He looked genuinely interested.

It came time for us to board so we continued a bit of conversation as we trudged on and found our seats.

After we had gotten settled and the flight took off, we resumed our volley. He talked about the cast on “Seinfeld,”  “The Tick” (pictured below), as well as “Family Guy” and the many other voices he had done in the cartoon world.

I told him I had written a TV spot for JC Penney in which we cast Bryan Cranston, Elaine’s other boyfriend, the dentist re-gifter, on “Seinfeld.”

“He was your competition,” I said.

“No contest,” he said, indicating that Bryan was clearly the better, more suave of the two.

He then told me all about his wife and kids. He pulled out his wallet and showed me photos of his kids – quite a few, he had four. They had his DNA and were all handsome and gorgeous.

“You are prolific,” I said. I think he blushed.

He told me how hard it was to have a family and be an actor. Was he flirting? Certainly not, I thought. I was a Pleb. He was Hollywood soon-to-be Royalty – a Patrician. But I did try to empathize with him, telling him that when I was on the road doing TV commercials, I could not have pets or plants.

“My plants died. Even my cactus. And I had to give away my lab, my sweet Simon,” I said.

He raised his eyebrows a bit, giving me a mumbled, “Yeah, I know what you mean.”

I’m not sure the parallel was really the same. I was, though, trying.

I shared more about the woes of being a part-time filmmaker, but said we did have a track by Tom Waits – who he said he loved. I dubbed this a personal victory.

Over the course of the six-hour flight, it was a verbal joust. We talked on and off about films, TV, books, music and more. When I thought of something to say or ask him, I would pop up over the seat and talk to him. He would do the same to me. We were like little Whack-a-Moles jutting up from each side of our seats. Mom even joined in on our conversation, piping up about movies she liked, even musical groups.

“Even though my first love is Bryn, I really like the Bee Gees,” mom said.

“They are some snappy dressers, those guys. Their white platform shoes alone should be feared,” Patrick said. Mom giggled and he winked at her.

Near the end of the flight, we both decided we needed to sleep.

As we started our descent, the flight attendant came on and said we’d be landing in about an hour and that we needed to wake up, make sure we did our customs forms, and other blah blah things we needed to do to enter the country.

Suddenly, I felt something touching my socked-footed feet – Patrick’s toes! He was tall enough that he could stick his feet under my seat and tickle MY toes with HIS!

At this point, you can imagine my surprise. I jumped up, making a big scene, bursting into laughter, and looked up to see him laughing, too.

“Just had to wake you up, make sure we didn’t lose you during sleepy time,” Patrick said.

After we landed and were gathering our belongings, he said to my mom, “This is for you. I want you to have this.” It was a jar of orange hard candies with an orange ribbon on the top. I have no idea where he got these, but he was insistent about parting with them.

“You keep an eye on her, ” Patrick said to me, nodding his head in the direction of my mom. “You never know what the Red-Headed Bombshell is going to do next.”

When we deplaned, we said our goodbyes. We wished him well at the Irish Film Festival – and with his connecting flight to Dublin.

And off he went, with his film on the trolley that clacked and clacked on the marble floor until the sound was just a whisper.

Mom still has the jar of orange candies. I am sure they’re rancid by now. But she and I won’t give them up, or eat them. And every time she sees them, or sees him in his commercial for National Car Rental, she tells the story.

“Do you remember the time was saw Patrick Warburton on the way to London? You know he gave me some candies.”

If I ever saw him again, I am doubtful he’d remember me. But at least, I’ll always have that moment when I went toe-to-toe with Patrick Warburton.