Mutato. This is the word I think of when I think of Devo. The word “mutato” (according to Mark Mothersbaugh, lead singer) is a mash up of “mutant” and “potato.” Thus the word, “Mutato,” which is the first part of the moniker for Devo’s commercial music venture, Mutato Muzika, and is the very place that I came to work with this epic band.

The year: 1998. The project: the JC Penney Holiday Campaign. The client had selected 15 “hot gifts” (read: cheap/affordable) that ranged from generic, slightly festive teddy bears to mini colorful TVs (yellow, pink, blue – they were cute as buttons) to somewhat okay sweaters in mostly unnatural, scratchy blends. We decided that for the maximum media punch each should be :15 and run back to back. The consumer would get a quick flurry and assault of cool stuff they just couldn’t live without.

Some spots were live action and we shot with Robb Pritts from Backyard Productions. Some required more complicated shoots so we worked with Rhythm and Hues, the company famous for the Coca Cola white polar bears and the film, Babe: Pig in the City.

We looked at a few music companies to work with, but decided that Mutato Muzika was The One. I mean, who could pass up the opportunity to work with Devo? Not us.

The tracks were always done after the shoots and after the editing. So when we traipsed into Mutato, we pretty much had the final product. Each :15 spot required a different musical approach. If my memory serves me, (and it usually doesn’t so apologies will abound after this), different teams were responsible for each of the spots. My art director, James, and I worked on a number of them.

But the one in particular that stands head and shoulders (sheep’s, that is) was the spot for wooly sweaters. (Sheep don’t have shoulders, but I couldn’t resist.) The concept was simple: the sweaters, each with wintery, earthy tones and crazy patterns, were from sheep who had grown these unique patterns on their fuzzy, woolen bodies –  as if the pattern was in their DNA.

It was as if JC Penney found these mutant (a theme!) sheep, shaved them then turned their little patterned coat into sweaters.

Can’t picture this? See this work of art here.

Nevertheless, it was the late 90s and the whole production took many days involving green screen, layers, lots of post work, and yes, live sheep. The idea was that the sheep would cross in front of the camera. Problem was, the mama sheeps wouldn’t budge. Only when we positioned their babies on the opposite site of the set would they come a ‘runnin’. And when they’d come a ‘runnin’, they each left a trail of nice poopy pellets behind. The PA’s would run after them with a shovel scooping up their smelly trail, thus their moniker (instead of Production Assistants) “Poop Assistants.”

Other spots involved golden retriever puppies pushing the mini TVs, puppeteers a la mimes operating the frolicking teddy bears, and a stunt mouse. Yes, the later had a  “wrangler” (full-sized human) who worked with him in a little “practice set” that was a shoebox. In it was his bed, a sardine can lined with a thin layer of cotton. The mouse’s job was to totter over in front of the camera and rub his nose, as if he was waking up. Cheese was put on his nose so when he was supposed to be rubbing his eyes and “waking up,” he was actually using his little mouse hands to eat the cheese. The proximity of his eyes and mouth were so close that him stuffing his little face could be mistaken for him rubbing the sleepy out of his eyes. Very intricate and nerve wracking, the whole kit and caboodle.

This particular spot was for one of those modern things called “online shopping,” and his cue line was, “…not a creature was stirring, not even a mouse.” Ba dum dum. Big hilarious punch line. Rumor had it that our budget for this entire project was $2.5 million. I think it actually was, as it was the tail end of the Clinton ’90s, the good old days.

But baaaaack to the sheep spot.

As was the practice, we’d have a conference call with the music guys/gals before the production, give them ideas about music, the direction, the vibe, then after the shoot, gather to hear the track played up against the rough cut.

For some reason, we didn’t do this with the Devo dudes. We all showed up at their Sunset Boulevard address without a plan; at least, this was the case with the sheep spot. The building was decidedly, mutantly cool. It was a round building from the ’50s that used to be a bank – a solid, green orb, that was painted in their signature Mutato green.

We all filed into the work room. At the helm was Bob Mothersbaugh, Mark’s brother. He sat in the engineer’s chair at the sound board tapping away, moving buttons, doing all the mysterious things that sound guys do. Above him was the monitor.

James and I sat down on the comfy couch. It was just the three of us, and our producer. So there we sat, enduring the silence and waiting for Bob to spin around from his perch (his chair and board were elevated a tad) and talk to us. After the typical intros, requisite questions and discussion of where we had lunched and where me might dine later, we started discussing music for the spots. The wooly sweater commercial came up and unlike the others prior, we were kinda stuck. We tossed around a couple of ideas, then decided to look at the spot one more time in hope that it would jog loose a crumb of something.

Deep from the recesses of my childhood came a melody from my soul, one that I could not not share. And just like Old Faithful erupting at Yellowstone, I, too, erupted with the song, singing at the tippy top of my lungs:

The look of shock on everyone’s face was as if I had just stood up, pulled up my shirt and revealed my bare breasts. Luckily, at that very point, in walked my salvation: Mark Mothersbaugh. The head guy. The one with taste. The one who knew that I had hit upon something. He asked me to sing it again…and again, I sang.

I could then see the uncomfortable looks on my colleague’s faces transitioning to that of delight, their heads bobbing “yes” to one another. (I’m so glad no one high-fived.) Mark, Bob and our team continued to discuss what instruments and then before we knew it, Mark brought out his accordion. As if he were atop a mountain replete in Tyrolean splendor clad in lederhosen, he played the tune again – sans my lyrics or singing. The accordion breathed, expanded and contracted mightily – it was alive! We all watched in amazement as Mark cranked out this simple, yet terribly jaunty tune on his giant squeeze box.

Beaming, we all heaved a collective sigh of relief.

But it wasn’t over.

As I was walking out the door to go to the ladies room, I sensed a presence behind me. It was Mark. 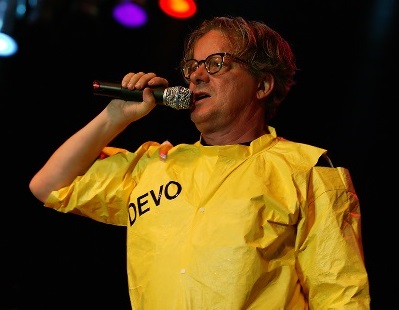 As I walked down the circular hallway that wrapped itself around the building, I felt Mark’s hand clasp mine.

And then we started skipping together, hand-in-hand, down the hallway, laughing and giggling about the childhood song I had birthed from my memory and heaved out with my lungs. “Skip, skip, skip to my loo, my darling,” is the refrain we sang. We skipped nearly all the way around the building…and then our hands drifted apart and we laughingly separated.

Cut to the next day.

We had sent the tracks to the agency to get approval before we did any more work, any polishing. So we gathered once more in the room with Bob and Mark. We cued up the tracks and played several of them on the speaker phone so our Dallas crew could hear them. The response for all of them was resoundingly enthusiastic, especially the sheep spot. But one track just wasn’t doing it for the folks.

When Mark heard the lack of love for one track, I could tell he was rattled. After we hung up the phone, Mark said with a sullen, sad face, “I’ve got to stop hurting people. I’ve got to get back in therapy.”

I could not believe what I was hearing. Mark actually cared what his clients thoughts, so much so that he felt personally responsible for their reaction. And his sharing of his need to go back into therapy, the transparency he displayed, it just broke my heart.

In my ten-year stint working with a large number of musicians in commercial houses, NEVER have I thought any of the people cared – to this extent. I could be wrong about my assessment. I hope I am. Nor during this decade had I ever met someone so willing to be vulnerable. Indeed, he was an artist of the highest caliber. A fine, dear man.

The overriding feeling I walked away with was that Mark, superstar that he was, didn’t put himself “above” others. He didn’t think himself a God like so many rock stars do. Despite what the band’s name represented, which was the DEvolution of society, Mark had actually done the opposite: he had evolved from the disposition that some rock stars possess – egos the size of Alaska.

Mark’s demeanor, his soul, was so refreshing and startling. Just so cool. The other very cool thing about working with them is that we all walked away with Mutato Muzika knee socks with each word stacked vertically on each sock so that you would read “Mutato” on one side and “Muzika” on the other. AND we snagged some “handsome man” hats!  (See pic below.) What a kick they were.

These days, when I hear “Whip It” or any other Devo song, I am reminded of Mark, his lack of egoism and his kindness. And in honor of that fanciful day with him, when I hear a song, I without fail seem to always get just a little more bounce, a little more skip in my step and vow to whip it good.