Over a Labor Day weekend a few years ago, I was visiting some old friends in LA. I decided to treat myself, as well as indulge in a little bittersweet remembrance of times past when I was lucky enough to have a per diem, where I wined and dined on the company dime in the 90s. So I booked a room at the very green and white, posh hotel, the Viceroy, with interiors by Kelly Wearstler, international style icon, whose palette boasted dreamy, verdant colors that popped amidst travertine-hued neutrals.

However, the only wrinkle was, well, wrinkles.

Those facial lines and crow’s feet that I could not escape seeing when I was there, as on every bedroom wall there was a collage of MIRRORS. Big mirrors inches apart. 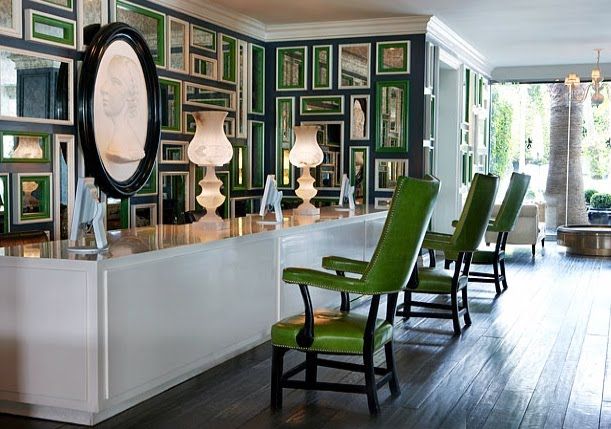 So everywhere I turned, I was faced with myself. The good, the bad and the ugly. I decided to not make eye contact with myself, but look down at the carpet when walking about the room. I got dizzy doing this and gave up after a while. What I saw was what I got.

One night, when I returned from dinner, I walked up and there was a long snaky line out front that was topped off with a doorman and a dreaded velveteen rope. I say “dreaded” because in New York when club hopping, especially during winter, unless you were a super model (not me), a movie star (not me) or on the list (not me), you shivered out in the cold in blustery winds until you either miraculously got picked, tailed in after someone, or gave up and decided to go to an old, broken down, has-been club like Danceteria got to be in the 80s, ashamed and defeated, and sipped on watered down Manhattans.

So I had a visceral reaction when I saw this, this shame-laced flashback struck my gut. Luckily, I was a party guest. I was not only on the list, I was sleeping there. So I walked right up in front of everyone, flashed my room key and waltzed right in. Liberation, at last.

The party was at the pool, a pool area that glistened in style and populace. The hotties were out tonight. The area was swimming in tanned legs in spindly tall heels, upon which gazelles teetered when they hobbled past. I saw guys with hipster stubble and matching baldish, fuzzy heads with sunglasses on at night. Some wore hats, porkpie hats a la John Lurie in “Stranger Than Paradise.” 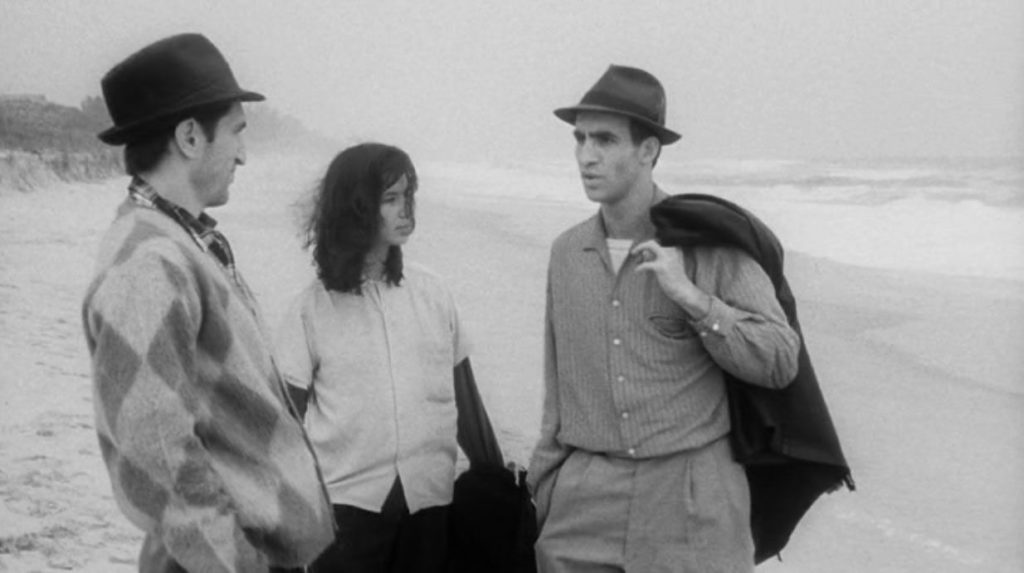 I don’t do hats. I can’t. I look like an egg head and I feel like Marty Feldman, my eyes always wide with fear and awkwardness about the said hat I am trying to pull off. 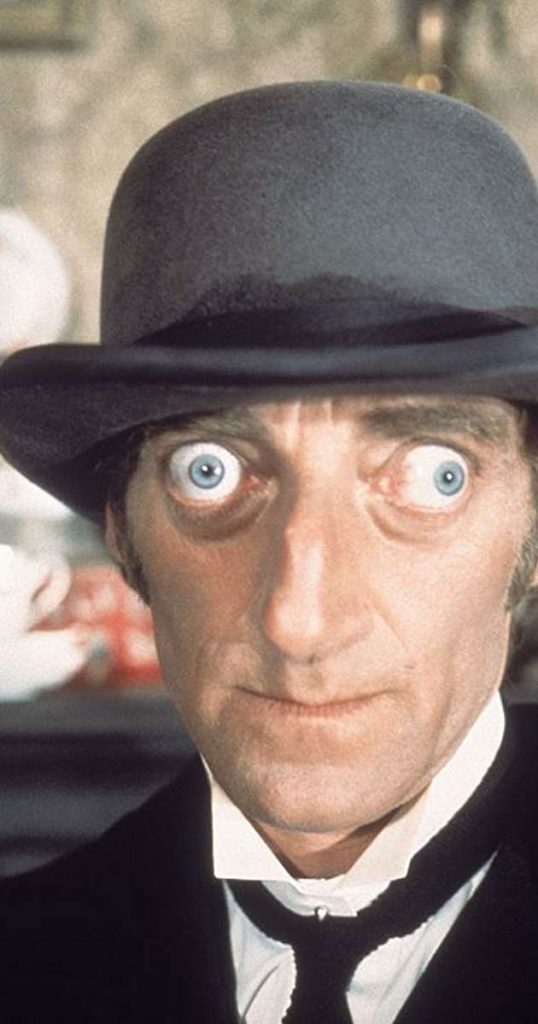 This night, I wore no hat or any Daisy Dukes or anything remotely revealing. In fact, I wore jean shorts to my knees, JORTS. And mules. I baby-stepped my way down to the pool. I don’t walk too well in backless shoes. Been known to topple over and sprain my ankle on occasion so I wasn’t taking any chances.

I took a seat alone on a little tree stump. It probably wasn’t a stump, but it felt like one it was so uncomfortable. I was about butt height to all who passed me so it was an odd vantage point. But I liked it. I felt safe. I could sit here, inhale the electricity and dynamic of the night while gazing at the soft, blue waters of the pool. The palm trees, tall as skyscrapers, added a nice ceiling to the evening.

Then he appeared. A man. Dressed in white linen from head to toe. He was tanned, too. But thankfully, not like George Hamilton. 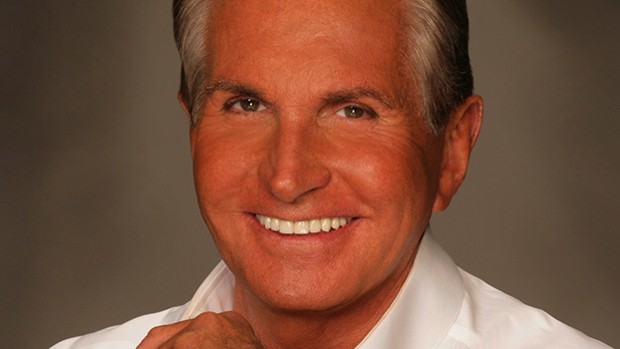 He asked if he could join me. I smiled and said, “Of course.” As soon as he sat down, he started talking. We exchanged the usual pleasantries like name, where from, what doing here, etc. Turns out this man was a lawyer. On and on we chatted about everything and nothing.

Then somehow, he asked me if wanted to go work out with him tomorrow at Ryan O’Neal’s gym. 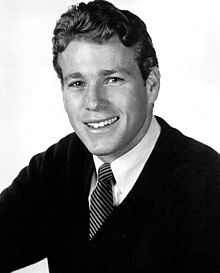 What was I hearing? Seriously? As if I would be seen in a leotard exposing my extra 30-pounds-since-college body to the starry, Ken doll beau of “Love Story?” Getting into certain undignified and highly awkward work out poses, some spread eagle? In my mind, I screamed, “NO WAY!”

I diminished my responses (“Oh” and “Right”), yawned, then excused myself. Told him I needed to get some rest for tomorrow morning. We exchanged vital contact info and off I went.

As I was walking away, I was still reeling from my decision, what my renegade mouth had said. That night, I didn’t sleep very well, obsessing about the morning. But I made one big decision: I would wear a butt wrap with my leotard. You know, a SOFA, Sweater Over Fat Ass. An appropriate camouflage. I wouldn’t get into any machine (inner thigh) that required me to spread my legs like at the gyno. Not pretty.

What would I say if I was introduced to him? And what about makeup? Without it, I have no eyebrows. I look very Elizabethan. 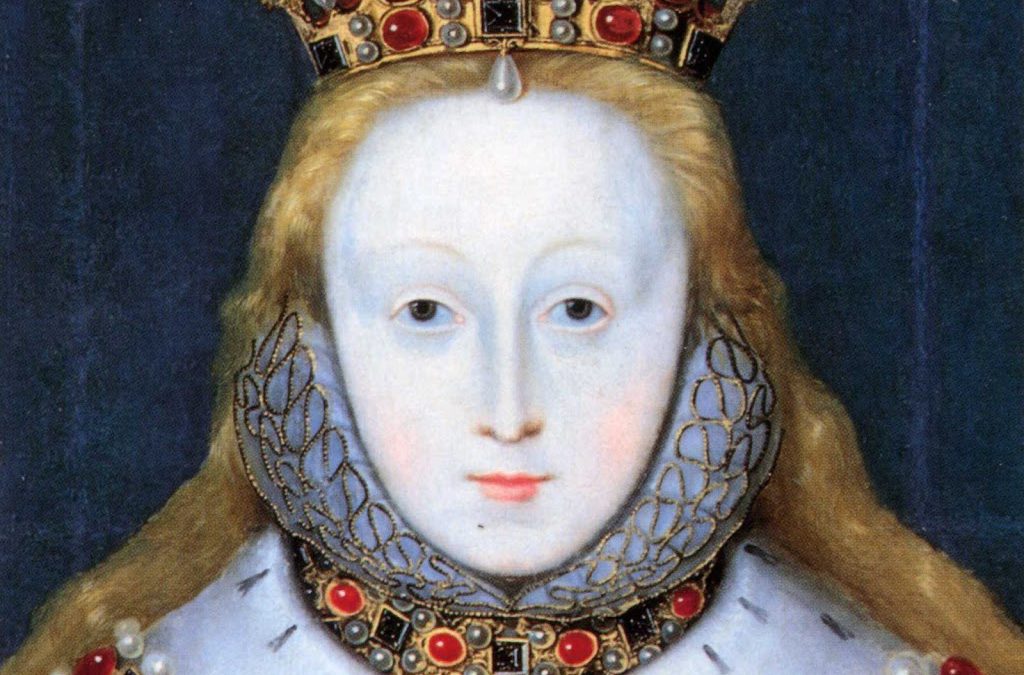 So I decided I’d wear brown eyebrow pencil. I had to.

I awoke with a start and popped out of bed waiting for my friend to call. I ordered breakfast. Then I looked out, well, no, I craned my neck to see the ocean view I had been promised. There was big busy street between the hotel and the Pacific…then there was a good chunk of buildings, THEN the ocean. If I looked carefully, I could see a bit of it, but a bit was better than none, coming from landlocked, concrete Dallas.

I dawdled around a bit more. Still no call. So I called him. Turns out he had stayed up a bit late, or that is what I heard in his gravelly voice. He asked if we could go to Ryan’s gym the NEXT day. WHAT? I had wrung my hands and thoughts for no good reason? Lost sleep?

I was not happy. But I agreed to his offer to grab a burger at a diner. With all the outdoor places to sit in the sun, I was not crazy about doing this, but I went with it.

The diner was in Brentwood. It felt kind of like an old Hollywood place that Lucy and Ricky might have frequented. He had his burger. I had my soggy, sad, iceberg-lettuce-infested chef salad.

He then said, “You know, there is someone I’d like to introduce you to, a friend of mine.”

I had heard the name, but couldn’t immediately place her.

“Catwoman, the original Catwoman. I’ve done some work for her and she’s really a great person,” he said. 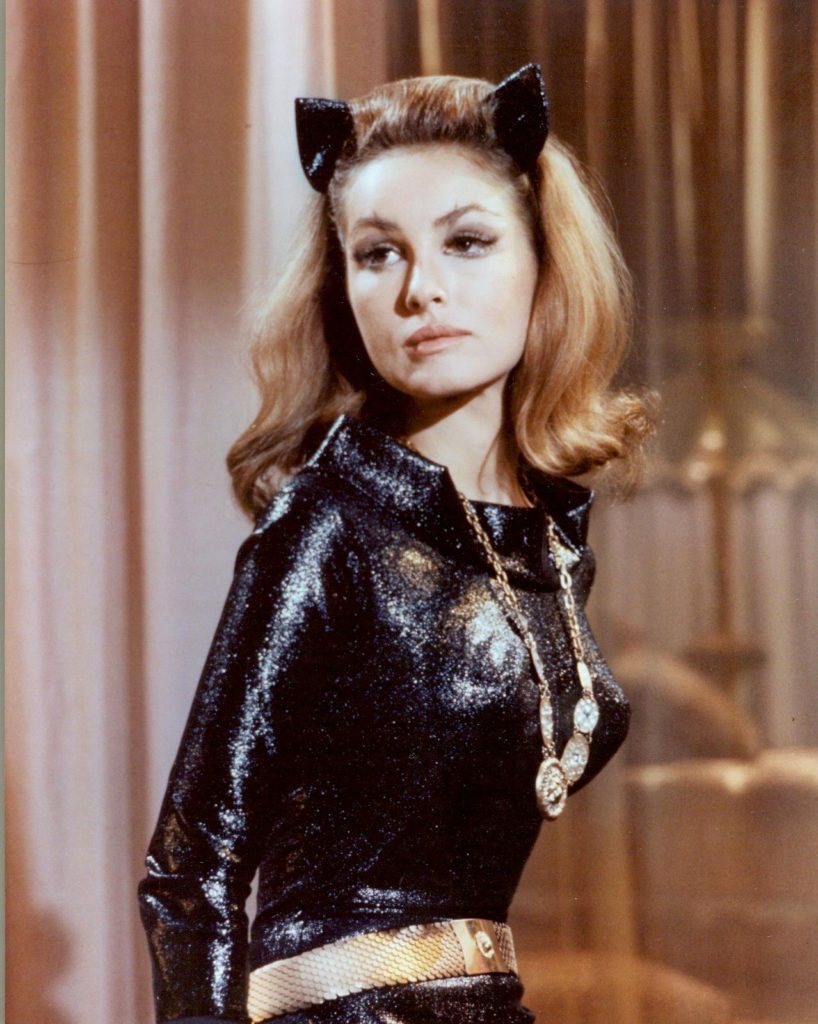 This was finally getting interesting. An Old School super hero. I was psyched.

Julie’s house was very near the diner. Off we sped through the winding streets of Brentwood. When we arrived he drove up the driveway all the way to the back. The house was California chic and as those houses go, smallish and deceptively expensive.

We walked in through sliding glass doors. There she was: Julie Newmar.

She stood and fed a young adult man who was seated at the table. He has some sort of disability. I believe he was Down Syndrome.

She glowed. Her face, her hair, her smile. All glowing. She was very, very thin, a former dancer. We said “hello,” and introduced ourselves. She introduced me to her son, who she said was deaf. At that moment, I was obviously struck deaf because I said to her son, “Hi John,” at which point, both my friend and Julie in unison said, “HE’S DEAF.”

I shrunk a foot. My mouth had a mind of its own yet again. My friend told me that Julie had John when she was around 50. Since then, he said she had been a selfless, dedicated mother to her boy.

As she stood and talked, she delicately, lovingly lifted spoonful after spoonful of food into her sweet son’s mouth. He had rich, chestnut hair. Doleful big eyes. I was touched by her composure and unflinching grace. She kind of purred.

She then gave us a tour around her house. It was marvelous. Tasteful design and decoration. She even gave us a tour of the backyard and told us about a feud she had with her neighbor, Jim Belushi, concerning a fence. I am not sure of the details, but it was pretty brutal. She talked about it with passion and fervor. I could see a bit of her claws coming out, but they quickly retracted.

She was alive and moving fast. It was hard keeping up with her as she scampered around her property.

I believe at the time she was near 80.

When I got close to her face, it was shining and flawless. My friend said she hadn’t had any work done. No cosmetic surgery. Nothing. I believed him. 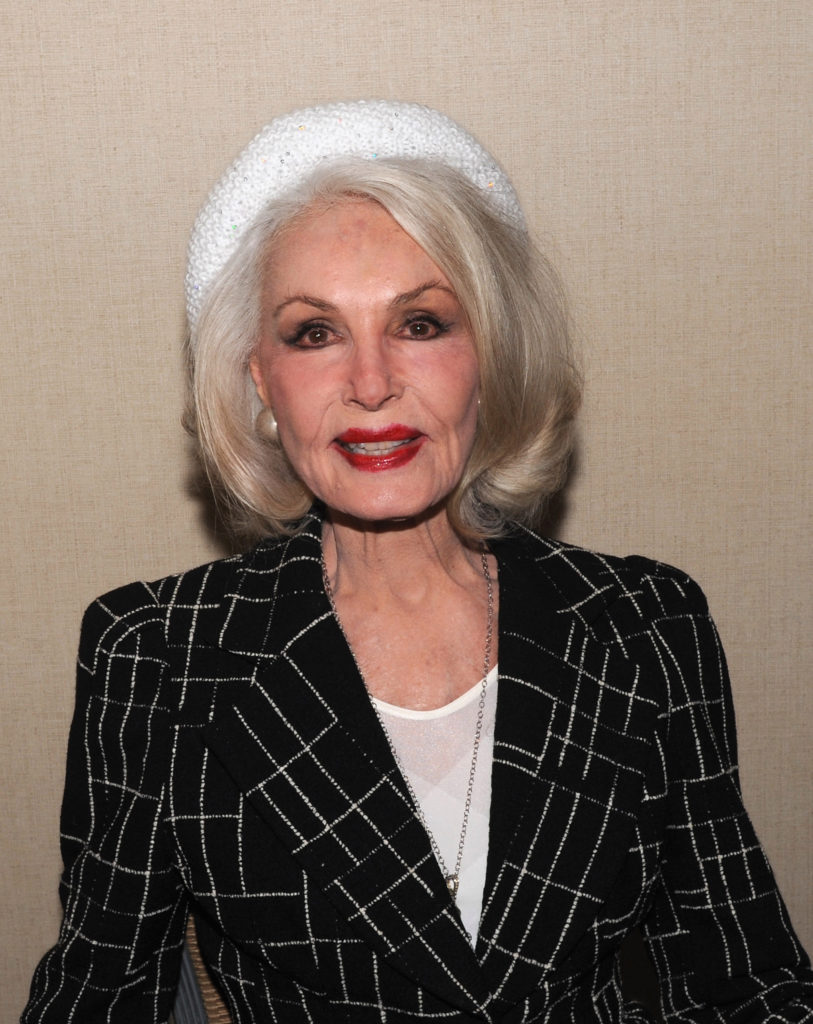 In her heyday, she was an exotically gorgeous dancer, singer and actress,  the daughter of a Ziegfeld Follies performer. Her career had been magical, kissed by fate at every turn. (There was even the movie Too Wong Foo, Thanks for Everything! Julie Newmar, that she did later, but one I never saw nor had any desire to. Really bad title.)

“Well, now, I don’t ever have to see that film because I have met the real thing!” I thought to myself.

Julie Newmar was as beautiful then when I met her as she was as Catwoman.

But she was leagues more beautiful to me now. Her adoration and care for her son shone brighter than her outer physical God-given features. To me, she really was a super hero. A woman, a mother, who loved her son unabashedly, a mother who would undoubtedly take a bullet for him.

The juxtaposition between Julie’s physical perfection and her son’s handicap ripped my heart right out of my chest. Her son’s seemingly compromised life seemed so unfair. But life, as we well know, is decidedly and often, not fair.

Once she was leaping tall buildings in a single bound. When I met her, she was gently depositing food into her deaf son’s mouth, nourishing, I’m sure, his soul as much as his body.

I was blessed to have met you, Julie Newmar, especially, now that you’re in your role of a lifetime.

You are, indeed, a real live super hero.