In 1999, I was in LA on a job. I was producing a radio spot I had written for JCPenney. At the time, my mother was in the Russell Crowe fan club. She and her friends, both in the Crowe’s Nest and the Silver Crowes, were agog about all things Russell: his latest movie, where he was filming, who he was dating (sleeping with), where he was last spotted, who he was with and I’m sure, what he had for breakfast and if it gave him gas.

She and I had traveled to Austin a number of times to see his band, TOFOG, perform. TOFOG is an acronym (sort of) for a film term: Twenty Odd Foot of Grunts. As opposed to laughs, or snorts, or farts. 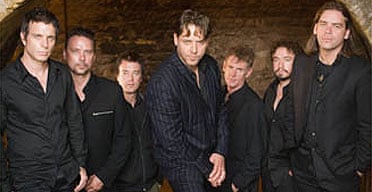 During my trip to LA, she suggested I contact some LA fans as there was a party where TOFOG was playing they were going to that I must attend. It was a wrap party for the movie, “Mystery, Alaska,” starring Russell and Judith Ivey. It was at the Viper Room, the place where River Phoenix died of an overdose. 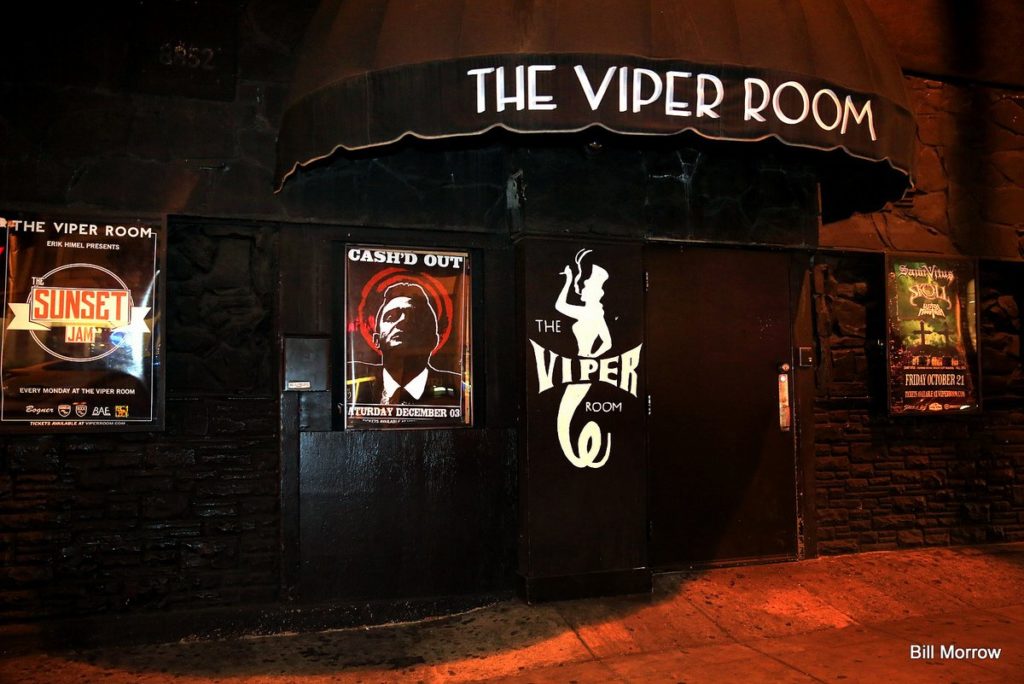 I didn’t know any of my mom’s friends. They were all sizes, shapes and ages. Gray hair retiree. Tall, blonde gorgeous dentist, aspiring actress. Another who had tattoos up and down each arm. Totally sleeved out and wore a pair of overalls and t-shirt to display her body artwork and her pitiable endured pain. One woman in particular was an email pal of Russell’s.  I don’t have any idea of how this was possible. It remains a mystery to this day.

So prior to the fete, we decided to meet for dinner then go to the Viper Room, where we could be on The List.

It was not dark yet, perhaps around 6 p.m. We arrived, the various and sundry crew that we were. In front of the door was an enormous, round and slightly balding gentleman the size of a bus. He wore a black suit, white shirt and shades. He did not smile.

Up walked one of us, the tall blonde dentist/actress. She had pretty white teeth and was oh-so lovely, so we thought she was our best candidate to approach this formidable wall of a human.

They exchanged pleasantries and then, the velvet rope was lifted and we were in.

Inside, the joint looked like a ’40s nightclub. All around the room were leather booths. Atop some of these sat white, crisp name cards that read “Reserved.” There were a few tables in the middle and on one wall, the stage, where TOFOG would play. 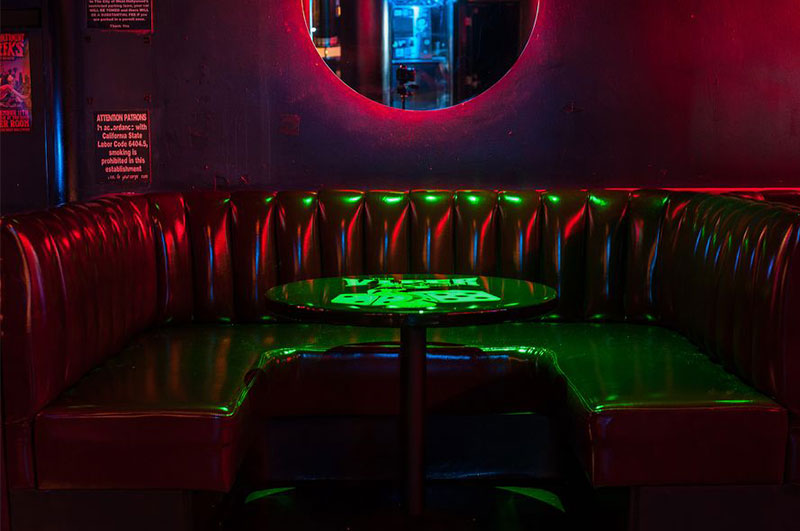 En masse, we moved towards the bar, of course, to get our adult beverages. I got a house chardonnay. The others indulged in stronger fare: vodka, tequila, and whiskey. The lights were dim and moody, except for the wall of bright white light behind the liquor bottles that were on shelves behind the bar.

The crowd was thin. Guys with hipster dark hair, goatees, soul patches, in worn sexy jeans.  There were a few older guys with gray beards who looked like they might be electricians, gaffers, etc. There were some beautiful young women in revealing, boobaliscious outfits who milled around who gave lots of hugs and air kisses to everyone.

We had trouble finding a table, as they were all reserved so we decided to assume a position at the back of the room.

The buzz. The whispering. The gasps.

Russell Crowe was in the house. 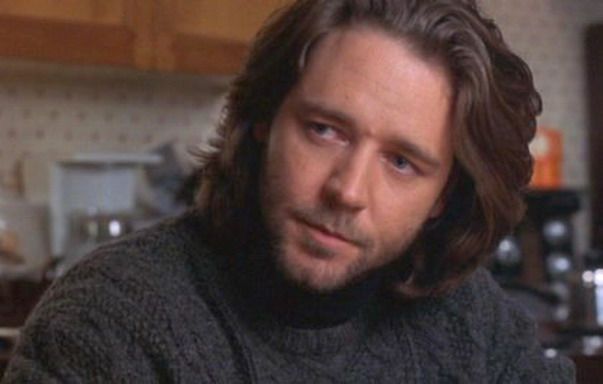 With lots of craning of necks and subtle (and not-so-subtle) pointing we located him.

His hair was wild and woolly. He wore a navy blue shirt and jeans. Nothing special.

It was at this point that I felt it. The urge to go up and meet him. My mother had been so nuts about him. Every conversation ended up being about Russell. As I said, “All roads lead to Russell with mom these days.”

I had an obligation.

I threw back a big gulp of the glaringly average chardonnay. And made my approach.

Tapping him on the shoulder, I said, “Hi, are you Russell”? Looking back, I am awed at my talent for stating the obvious.

I told him my name.

“My mother is huge fan so I just had to come over and meet you and shake your hand.”

His eyes were blue, stained glass windows, a kaleidoscope of sky blue and deep azure. His Aussie accent was thick, as was his five o’clock shadow. 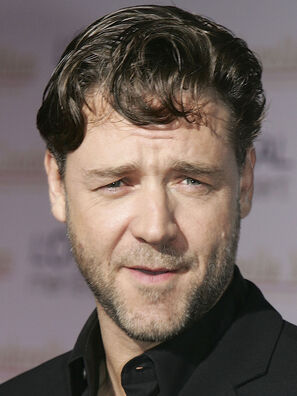 “You tell your mum hello for me,” he said.

Then, I got short of breath, panicked. The awkward silence was bellowing. We were face to face, locked in a gaze that was heavy with interest from my side and perceived (mine) slight interest from his side. At that point, I just slid my hand out of his manly grasp and stepped back. He smiled. I smiled. That was it.

I ran back, breathless, atwitter, exhilarated. I was a mini-celebrity within my group. Then the questions came: what were his eyes like? How did his skin feel? How close were you to his face? How did he smell?

TOFOG was slated to play in about a half hour so we refueled with a variety of spirits: gin, vodka, whiskey. And of course, my mediocre house chardonnay – quite un-buttery.

The place filled up pretty quickly around show time. We stretched our necks to see Danny DeVito and Kim Basinger at those hallowed reserved tables. I did get a glimpse of the shine atop Danny’s cue ball, bald head.

Kim was nowhere to be seen. Then the lights dimmed…and the crowd cheered. Russell and band were about to hit the stage.

The velvet curtains opened: drums clattered and guitars wailed. A veil of star-struckness fell up on the room, all of us sporting our “O” face. 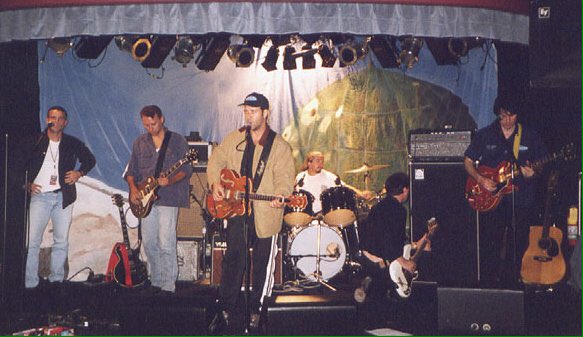 All eyes were on Russell.

Our valiant group had managed to work out way through the crowd to be on the front row. I was just left of the microphone and pressed up against the stage. My wine glass sat precariously, threatening to tip over, at the very edge of it.

TOFOG started their set with an all-time favorite, one with jaunty, jangly guitars and lyrics about crossing a river. Russell then sang about heartbreak, lost love – each with a pained look, expressed through his eyebrows and furrowed forehead a la James Dean.

I had thrown back a few more chardonnays so I was feeling a bit daring, even more so than I had been when I met Russell.

I was eye-level with the stage…and Russell’s feet…and they were bare. I could see the hair on his toes.

They were so tempting, They looked so cute, like little pink (albeit hairy) shrimps right in a row.

As if I was possessed with some foreign spirit, all reason escaping me, I reached out and grabbed his toes.

Without flinching he yanked his foot from my grasp, and launched into another song.

Then, he looked at me. He smiled and he winked at me. 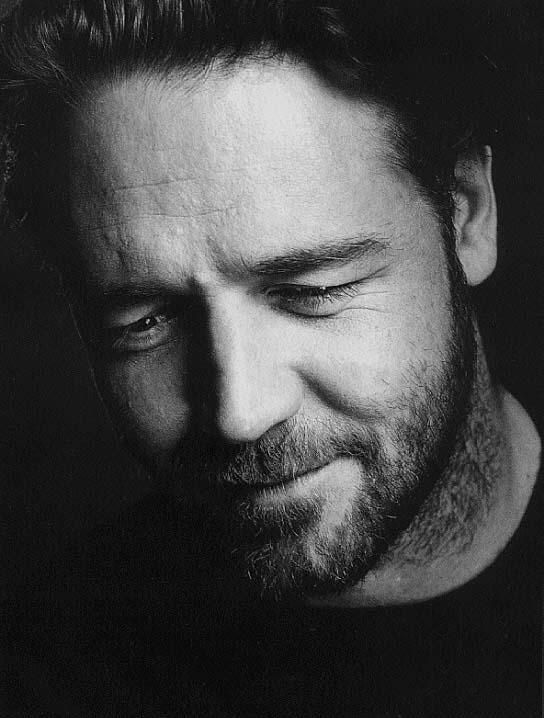 I then let out hideous “yahoo” like a squealing wildebeest.

I had been validated. I existed. I was not invisible.

Why was this so important? Why did I need a celebrity to validate my existence?

My take on this: we hold up celebrities in our society as modern day Gods from Greek society who possess immortality and/or super powers.

If we are approved of by this lot, then somehow we, too, become elevated from the masses. And for a brief moment, we shine.

When the concert was over (and after two encores), the band escaped out a side door. Our group rushed as fast as we could through the cloggy crowd after them to beg for autographs. One even went out the front and around to the side to see if she could see The Man, or better still, snag a band member.

But they had vanished.

It had been rumored that they were staying at the Bel-age (nicknamed the “Gar-baahge” by my former ad world colleagues) so we got the bright idea to go in search of them at the hotel.

We snuck in and then took to the stairwells, yelling their names, opening doors on each floor to see if any heads popped out of any doors. I’m surprised we weren’t arrested. This continued for a while until we gave up. No such luck. It was time to go back to our hotel.

That was over a decade ago. Since then, Russell has won an Oscar, had two kids and gotten a divorce. And until his recent starring role in “Noah,” (a far cry from the young, strapping gladiator years earlier), he has seemingly slipped from Hollywood’s radar. 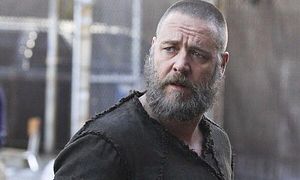 How quickly one can disappear, like a vapor, from the limelight. How fickle the studios can be.

I wonder if Russell ever felt invisible during those days of non-screen time.

The last pic I saw of Russell reflected an older, grayer man. The man whose foot I grabbed, now had, yes, crow’s feet.

Time can be cruel to the beautiful.

Happily, though, my memory of meeting him is not tarnished. Both of us, he and I, will always be young, less wrinkled and vibrant. Sans sagging, high LDL, or dark circles. 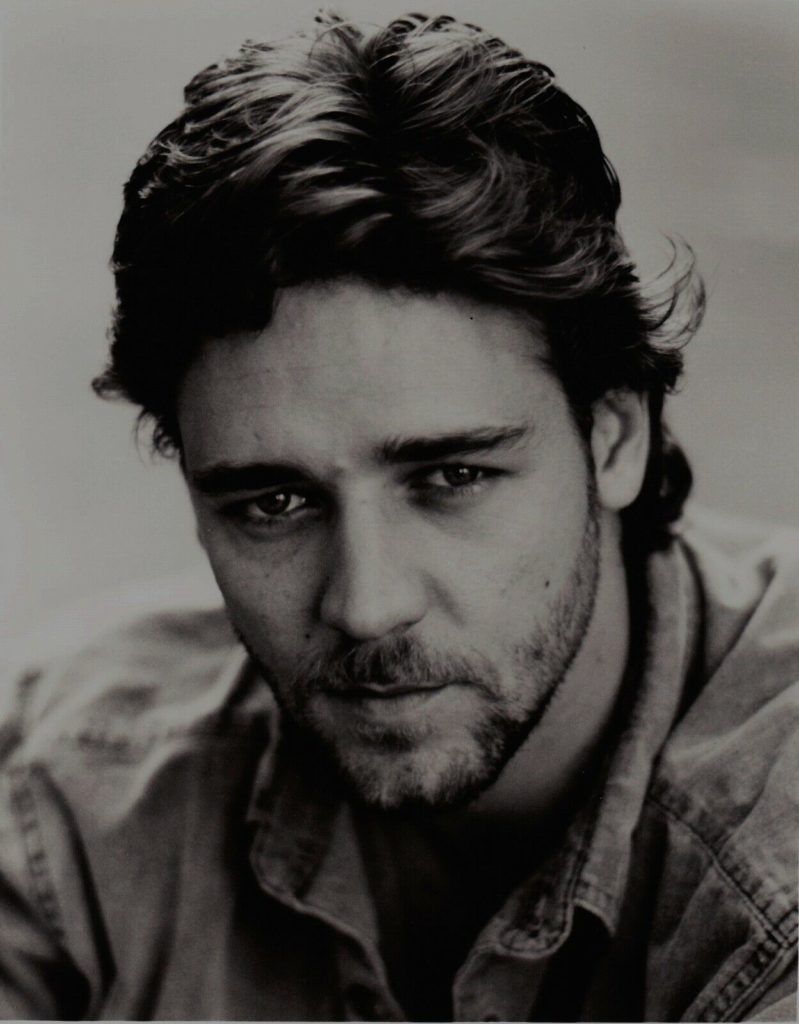 I can safely say this man, Mr. Russell Crowe, and my memory of meeting him that star-filled night, will always bring me to my feet.